The Death of Cars: The private automobile is running out of gas

Posted on Saturday, 1 June, 2013 by liammoriarty 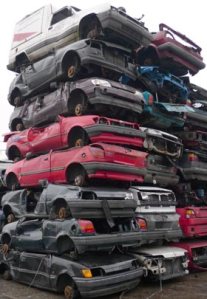 Junk cars in a scrapyard in Norderstedt near Hamburg, Germany. (Fabian Bimmer/Associated Press)

Over the past century, automobiles established themselves as the default mode of transportation across the industrialized world and became the gotta-have item that proves developing countries have arrived. Cars have bent to their needs everything from patterns of land use to foreign policy, triggering vast cultural changes across societies as they created a voracious demand for natural resources and widely polluted the air, water and land. And while some of the effects have been positive, it’s not a stretch to call automobiles the most widely-destructive technology unleashed by the industrial era.

I'm a journalist living in Seattle and Europe. This blog is to explore the connections and commonalities between Western Europe and the Pacific Northwest.
View all posts by liammoriarty →
This entry was posted in Business, Climate change, Energy, Natural Resources, Transport, Uncategorized, Waste and recycling and tagged Cars, costs of cars, death of cars, driving, transportation. Bookmark the permalink.